This article is part of our HSStub project.

Currently, it doesn't live up to our wiki standards, but you can help us by expanding it or sharing what you know in a related discussion.
To learn more about this project, go here. 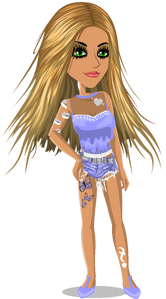 viivia07 is a regular user on MovieStarPlanet (FI). She is level 64 (Extremely Cool Movie Star). She is 17th on the FI highscores.

She became famous because of her movies. Her looks and artbooks got a decent amount of loves, although none of her artbooks were extremely popular.

She had been in a relationship with the previous top spot holder Uljas before he deleted his user in 2016.

She quit on March 10, 2017. She used to be best friends with Sallastara, but when she became inactive Sallastara removed her from the spot. She was third on the highscores in mid-2016, but has been falling down in the highscores ever since as other users are passing her.

Retrieved from "https://moviestarplanet.fandom.com/wiki/Viivia07?oldid=177743"
Community content is available under CC-BY-SA unless otherwise noted.