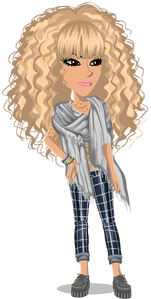 Truthhurts, also known as Ana, initially played on an account called "Jade <3". She later abandoned the account for multiple reasons and started fresh on her current account. Despite quitting for many months, she came back in 2016 and began using Truthhurts. Ana is best known and has gained recognition for being on the forums. She gains most of her fame from movies, artbooks, and autographs. In March 2017, she leveled up three times. Her most popular artbook received over 500 loves. When online, Ana makes movies, messages friends, or goes on the forums.

Ana's artbooks are usually shape art or for friends. Her movies are short movies.

Ana has a tan skin tone, hazel eyes, a pointy nose, and pink lips. She is usually seen with freckles and light blonde hair, which she occasionally likes to change up depending on the outfit. Although she likes to mix and match with different clothing items and styles, her style would be chic. She often wears pastel colors, but sometimes wears colors such as black, gray, and red. Her outfits are usually 2-4 colors.
Her looks get around 6-20 loves. Her most loved look received 50 loves. She enjoys making looks and making looks for others.

Retrieved from "https://moviestarplanet.fandom.com/wiki/Truthhurts?oldid=176021"
Community content is available under CC-BY-SA unless otherwise noted.