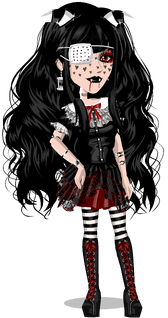 Taylor Swift1717 is a regular user on MovieStarPlanet (US). She is level 28 (Recommended Movie Star).

Taylor Swift1717, also known as Tay, is best known for her presence on this wiki and supporting other users by giving out autographs, wishlist gifts, or watching movies. She also gained some recognition through her most viewed movie, "Stop Being Mean Online Number For", and her most loved artbooks "themeidea2018" and "Easter Egg Artbook". She gains a lot of fame from giving out greets, starring in movies, and giving out autographs. When she is online, she shops, messages her friends, and watches movies.
Tay very rarely makes movies, but when she does, they are short movies. She only makes artbooks for MovieStarPlanet events, but when she made them in the past, they generally showed off her outfits and got 4-20 loves. She regularly makes looks of her original outfits and occasional cosplays, most of which are named "~".

Tay usually has red "Pretty Perfect" eyes with black eye shadow, a pointed nose, a pale skin tone, and dark magenta or black lips. Her outfits are typically inspired by a different fashion style each time, often including lolita, or goth elements. She always includes high socks or tights in her looks, typically paired with platform boots, vampire fangs, accessories adorned with bats or skulls, and other spooky accessories. In the past, she made many outfits based off of her favorite characters, but she rarely does this now.

1 of 6
Add photo
Retrieved from "https://moviestarplanet.fandom.com/wiki/Taylor_Swift1717?oldid=181111"
Community content is available under CC-BY-SA unless otherwise noted.