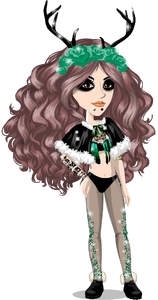 Sky93 is a regular user on MovieStarPlanet (UK). She is Level 27 (Trendsetter Movie Star).

Sky93, also known as Sky, became known through friendships with high scoring users. She is best known for starring in Ishacool's movie "QUITTING?: Your Questions Answered!", which gained Sky a ton of recognition and leveled her 4 times. When she's online, Sky spends most of her time on MSP taking part in activities on the forums.

Sky quit not long after a year of playing MSP, but she returned within a year. Upon returning, she gained most of her fame through starring in movies, her own short movies, greetings, and Fame Booster; these things caused her to go from level 6 to level 11 right away and reach level 16 within 3 months.

Sky's artbooks are usually made to promote an activity she is taking part in or hosting, but other topics include close friends' birthdays and information about her YouTube channel. Her movies are mainly short movies, gaining around 5-20 views each. Her most popular movie is "Ice Bucket Challenge:MSP version" with over 60 views.

Sky has dark brown "Pretty Perfect" eyes with black eye shadow, tangerine orange "Cherry Gloss" lips, a pointy nose, and pale skin, although she changes her appearance often. Her hair color is almost always blonde, with clothes in various colors that she matches together. Her style is mainly girly, and she can be seen in themed looks that often match the current theme.

Retrieved from "https://moviestarplanet.fandom.com/wiki/Sky93?oldid=144698"
Community content is available under CC-BY-SA unless otherwise noted.