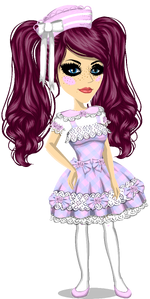 Member Since: February, 2014
sara! was a regular user on MyStarPlanet (ES). She was level 43 (Inspirational Movie Star), and on 21st spot of the ES highscores board.

Sara!, also known as Selma, initially joined MSP on the Norwegian server, with her best friend Sara Tah. She and "Sara Tah" joined the ES server soon after it was created, and she became known for her close friendship with itzfairy. She is currently best known for her short movies and close friendship with "Sara Tah". She's gained her fame through starring in "Sara Tah"'s movies, her own short movies, and her artbooks. When she's online, sara! makes movies, makes artbooks, and chats with friends.

Sara! only makes short movies. Her most viewed movie is one of her movies titled "7" with over 90 views. Her artbooks are mostly about friends, MSP related or humorous things. Her most popular artbook is "Elsa and Anna :D" with over 300 loves.

Sara! had light turquoise eyes, rusty red lips, a freckled nose, and peachy skin. Her casual style was mainly girly girl and she often wears dresses. She usually used clothing from the current theme. Her looks mainly cosplayed anime characters, or characters from other TV shows. She often weared the colors light blue and peachy-pink because they were her favorite colors.

1 of 4
Add photo
Retrieved from "https://moviestarplanet.fandom.com/wiki/Sara!?oldid=174445"
Community content is available under CC-BY-SA unless otherwise noted.