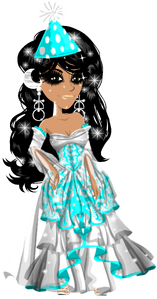 rosalina 57 first joined MSP in 2013 but quit afterward since she thought it was boring. Later in 2016 she came back and made an account on the Canadian MSP, where she started rare trading. Later, she switched to the German server to trade there. She has earned a lot of fame through rare trading. She is best known for her rares, since she has a lot of rares, which are worth a lot. When she is online, she usually rare traders and messages her friends. One of her noteworthy events was when her trade artbooks reached top page 3, where she got a lot of friend requests and autographs, earning her a lot of fame. She deleted all her movies, looks, photos and artbooks once. She is only making looks now.

rosalina 57 has blue eyes, a dark eyeshadow, a quite tan skin and light colored lips. She usually wears rares, where the colors match. She rarely buys clothes from the shop, since she wants her account to be a rare account. Her style is a mix of chill and casual. She often changes her lips and eyes.

Retrieved from "https://moviestarplanet.fandom.com/wiki/Rosalina_57?oldid=167782"
Community content is available under CC-BY-SA unless otherwise noted.