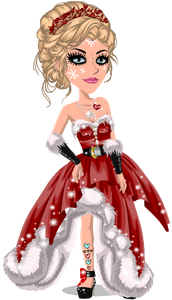 Rdkitkat is a regular user on MovieStarPlanet (US). She is level 46 (Pop Movie Star).

Rdkitkat initially gained recognition through her artbooks and movies, then gained additional recognition through her friendship with the user "#6315594519- kyle*", which led to a friendship with the highscoring moviestar, Mybeau. She went on a hiatus from July 2013 to the end of 2014 and was inactive until early 2015; this caused her to lose some support and recognition, but not all was lost. Since then, she has created a name for herself through her comedic movies, which vary in topic and earn her most of her fame. In addition to her movies, she's gained a lot of her fame through autographs and starring in her friends' movies. While on MSP, she mainly makes movies and artbooks and chats with friends and fans. She also makes MSP edits, which she posts off-site.
As mentioned before, Rdkitkat's movies are usually comedic, with a short movie made here and there. Her movies usually get hundreds to thousands of views, with her most viewed being "HOW TO GET CLOTHES!" with over 2,300 views. She also makes artbooks that also get hundreds to thousands of loves, her most loved being "Katy Perry - Roar" with over 8,000 loves. These artbooks are usually about her team, a celebrity, or a contemporary issue.

Rdkitkat has light green "Pretty Perfect" eyes, strawberry-pink "Cherry Gloss" lips, a light skin tone, and a pointed nose. She normally wears eye makeup and black blush along with freckles. The colors she uses vary upon looks, but she generally sticks to brighter colors and most often wears pink. Her overall style is girly and generally based on the current season, but it can vary depending on whether or not she is wearing another user's look.

Retrieved from "https://moviestarplanet.fandom.com/wiki/Rdkitkat?oldid=176670"
Community content is available under CC-BY-SA unless otherwise noted.