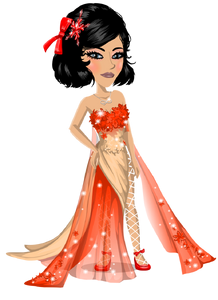 Qxeencesss is a regular user on MovieStarPlanet (UK). She is level 30 (Headline Movie Star).

Qxeencesss became known through communicating with moviestars on forums and is mostly known for her messages on forums and in chatrooms, her photos, her movie series, and her real life friendships with Inzpiremaria, Angle2107, and Sally2107. Her most popular photo had over 3,000 loves and over 32,000 views, but it has since been deleted. She's gained most of her fame through her friends helping her by giving her autographs and loving her things. When she's online, Qxeencesss helps her friends level up by giving them greetings and autographs.

Her movies consist of short movies and movie series, although her most known movie series has been deleted. She has gained recognition for her movie series called "Serenity". Her artbooks are mainly about herself so her friends can learn more about her.

Qxeencesss has light green eyes with pink eye shadow and dark purple lips. She changes her skin color weekly. Her style is mainly tomboy with a mixture of girly girl. She usually wears clothing from older themes. She often wears darker colors rather than light or vibrant colors, but she does wear white sometimes. She rarely makes looks.

Retrieved from "https://moviestarplanet.fandom.com/wiki/Qxeencesss?oldid=172812"
Community content is available under CC-BY-SA unless otherwise noted.