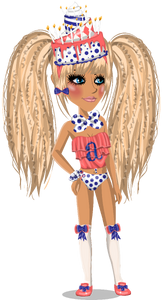 QueenIIAimee is a regular user on MovieStarPlanet (US). She is level 36 (Superb Movie Star).

Amy is best known for her team, "A-Listers", and her artbooks. Her fame and recognition began when now-deleted top "Jewel" member, "Kentar2131", created a movie to spread the word about Amy's group, "A-Listers". This resulted in Amy and many "A-Listers" becoming close with ItzJerz and her "Jewels." However, this ended around August 2015, when Amy and Jerz had a fallout. Shortly after this, an artbook Amy created about Pumpchkin got to the top of the weekly highscores and was noticed by Pump. This resulted in Amy and her team becoming close with "Pumpchkin" and her team, "Porters".

On August 15th, 2015, Amy quit and deleted her account to deal with personal things in real life. She still remained on Twitter, and many "Porters" found out she was becoming closer with the "Jewels" again, so the alliance between "Team Pump" and "A-Listers" died down. Amy occassionally went on her backup account, "Rymy E>," only to check up on things, but eventually decided to return to MSP under the username "QueenIIAimee." She gained back fans and friends quickly and restarted the "A-Listers".

Amy mainly makes artbooks, many of which are for thanking friends or fans or announcing contests. She also makes short movies along with occasional "skit" movies such as "No! It's Pixi :o" and "Taking a Stand".
She earns most of her fame through her own movies, starring in her friends' and supporters' movies, her team, and receiving autographs, with the help of fame booster.

Start a Discussion Discussions about QueenIIAimee