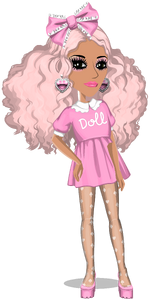 nightcoreElsa is a regular user on MovieStarPlanet (UK). They are level 28 (Recommended Movie Star)

nightcoreElsa, is a moviestar on the UK server, best known for forums. Before her cousin gave her the account as seen today she had quite a few other accounts one of them being 'tinyboxtimlovescookies' which was a shared account with friend 'cookiecat 500'. She became inactive on nightcoreElsa during the summer of 2016 due to a broken laptop, the account would later go untouched until around Christmas of that same year. She levels up by saving her piggybank for months at a time. She spends most of her time commenting on photos and browsing the forums.

NightcoreElsa has a tan complexion, dark brown eyes, dark red lips and black eyeshadow. She usually wears dresses, heels and various accessories. She normally only wears one hair colour, black. Her appearance has had numerous changes since she joined.

Retrieved from "https://moviestarplanet.fandom.com/wiki/NightcoreElsa?oldid=172801"
Community content is available under CC-BY-SA unless otherwise noted.