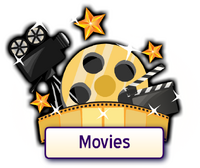 Movies are a creative feature in MovieStarPlanet on all servers that allows players to create movies with the use of speech bubbles, backgrounds, items, music, animations, and users. Creating and/or watching movies rewards the player with various amounts of fame and starcoins depending on the rating and the number of views.

Retrieved from "https://moviestarplanet.fandom.com/wiki/Movies?oldid=180013"
Community content is available under CC-BY-SA unless otherwise noted.