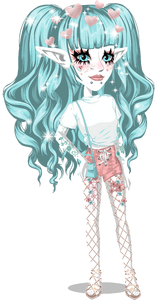 Magisk! is a user on MovieStarPlanet (US). She is level 28 (Recommended Movie Star).

Magisk! started playing MSP in December 2011 on the danish servers under the user known as stary1. Not a lot of time passed until her password got leaked and one of her friends took all her belongings and she stopped playing. In 2014 during a tough time in her life, she returned to stary1 and eventually bought a year of Star VIP. She gained fame and popularity by starring in many high-scorers movies as well as creating artistic artbooks of which reached the top several times. All of this and the friends she made, helped her through the hard times and she kept playing until her VIP expired. In 2019 she joined the US servers as Magisk!

In June 30th, 2019 she created a Youtube channel named Magisk! MSP. Dedicated towards her MSP account, but it is currently inactive.

The name Magisk! is inspired by the Danish CS GO player Magisk. It also means "magical" in danish.

Magisk! created her account knowing she wanted a unique style. She describes her style as a mix of pastel, goth, kawaii and ghost.

Her go-to is a rare white skin, with no eyebrows and a lot of colors. She uses the website colorhunt.co is an inspiration for color combinations.

Retrieved from "https://moviestarplanet.fandom.com/wiki/Magisk!?oldid=181005"
Community content is available under CC-BY-SA unless otherwise noted.