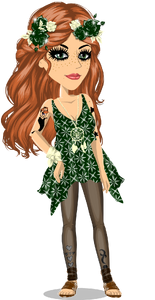 Hippie! is a regular user on MovieStarPlanet (US). She is a Level 22 (Famous Movie Star).

Hippie was originally best known for her close relationship with her long term best friend, Impact, however, has since created a name for herself through her twitter, artbooks, and looks. She's gained a large part of her fame from being featured in her friends movies, though she has gained some for herself through her own short movies.
Within MSP she mostly keeps to herself and close friends. She creates looks, short movies, and ArtBooks from time to time, but rarely steps outside of that. On twitter she mostly posts memes and jokes related to MSP, many of which are featured on Impact's secondary blog.

Not long after Impact announced she'd be taking a "semi-hiatus" from MSP in April, 2014, Hippie made a post on twitter stating "When my friends stop going on MSP, I stop going on MSP".. Following that she had very little activity, even when her friends came back. On April 23rd, 2015 Hippie tweeted "Bye" and updated her status on MSP to say "Bye! ♥". She has only stopped into MSP and twitter a few times since.

Hippie has a set of emerald colored eyes, rose lips, a fair skintone, and a small nose. She almost always uses freckles(with skin colored blush) and occasionally uses black eyeshadow.
Her overall style can range from "girly" to "hipster", and can even be a mix of many different styles. She can often be seen wearing more neutral colors and various types of green. Sometimes she creates themed or character looks which don't abide by her normal style or color choices.

1/10
1/6
Community content is available under CC-BY-SA unless otherwise noted.
Advertisement