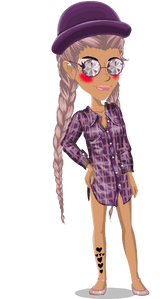 Helen011 is a regular user on MovieStarPlanet (US). She is level 26 (Lifestyle Movie Star).

Helen initially became known through her friendship with "foxyroxy757575" and is currently best known for her short movies and looks. She gained most of her fame from her artbooks, movies, and looks; however, most have been deleted, and only 10 movies, 4 artbooks, and 6 looks remain. She became inactive at level 26 but occasionally comes online to make short movies, update her status, and change her clothes.

1 of 10
Add photo
Retrieved from "https://moviestarplanet.fandom.com/wiki/Helen011?oldid=120510"
Community content is available under CC-BY-SA unless otherwise noted.