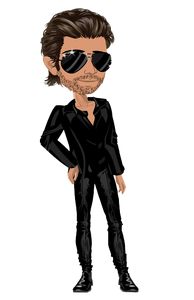 hampus001 is a regular user on MovieStarPlanet (SE). He is level 47 (Chic Movie Star).

Hampus001 joined MovieStarPlanet not long after the game was created and began creating movies and visiting chatrooms; through this, he gained fame and friends. He continued to rise in popularity in 2012 and 2013 when he started publishing artbooks, several of which received thousands of loves and hit the top page. Since then, he has taken a couple large hiatuses: from the start of 2014 to March 2015 and during the majority of 2016. Today, he is well-known for his style, which many users regard as "security guard". When he's online, he chats with friends and purchases outfits and animations.
As previously mentioned, several of his artbooks have garnered thousands of loves. These artbooks are "VIP Hjulet Och Present Hjulet!" (VIP Wheel And Present Wheel!) with over 5,400 loves, "Titanic !" with over 2,500 loves, and "♥ Svamp Bob Fyrkant ♥ Love It ?" (♥ Sponge Bob Squarepants ♥ Love It ?) with over 1,920 loves.

Hampus001 has dark brown eyes, a medium-size nose, and a tan mouth to match his skin color. His signature style is sophisticated and usually features a black suit, black trousers, and a pair of black boots, a style that he did not change for four months. His typical look also includes a dark brown beard with a dark brown slicked-back hairstyle, black sunglasses, black tattoos on his arms, and a black dragon tattoo on his chest. The look can vary in color, including black, red, and gray.

hampus001 in 2010.
Add a photo to this gallery
Retrieved from "https://moviestarplanet.fandom.com/wiki/Hampus001?oldid=184470"
Community content is available under CC-BY-SA unless otherwise noted.