This article is newly created and incomplete!


If it's not expanded shortly it will be deleted until it can re-created as complete. 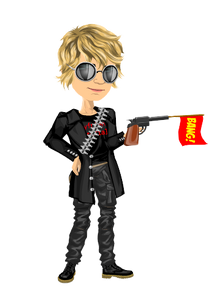 Dylanklebold 2 was a regular user on MovieStarPlanet (US). He was level 10 (Stylish Star) when his first account was terminated.

Dylanklebold 2 was the first of 15 accounts to be terminated from his dark-humored comments on the US forums. He gained popularity and a following from his Dylan Klebold impersonation. Some followers created accounts of other shooters which Dylanklebold 2 became friends with.

Dylan and his friends began rising to fame with dark-humored (and often shooting related) comments and forum posts, causing a small following for the few. Dylan also made a few artbooks and movies, mostly of him and his three friends with gun animations.

The impact Dylan had on the website was massive, the words "dylan klebold" and other columbine references became censored and any columbine videos on the onsite youtube app were removed. Some animations Dylan used of guns were turned into water guns while Dylan was still active, however this is unknown if he was a reason for the change.

In early January 2018, the police were called to Dylan's house because most likely, of his threats to the MSP headquarters. He posted a sincere apology on the forums before disappearing for a while. His third account was then IP banned. Dylan returned on a new account later that month.

In February 2018, Dylan got into a fight with a user named qtywhvre x on the forums who was angry at the jokes he made. Dylan found out that her aunt had been shot in a shooting, which he then used as a weapon against her. Many forums were made about the drama happening between the two, but once qty threatened to call the police Dylan surrendered.

Later in 2018, Dylan slowly stopped going online with new accounts, he returned for a short time in April of 2020 but was deleted in under 24 hours.

Dylanklebold 2 always had blond hair and light skin. His outfit consisted of sunglasses, a black trench coat, black shirt, black jeans, and black boots. Sometimes his outfit was accessorized with bullets and a backward black cap.

Retrieved from "https://moviestarplanet.fandom.com/wiki/Dylanklebold_2?oldid=182084"
Community content is available under CC-BY-SA unless otherwise noted.