Ashley Twin is a current user on MovieStarPlanet (US). She is level 33 (Memorable MovieStar). 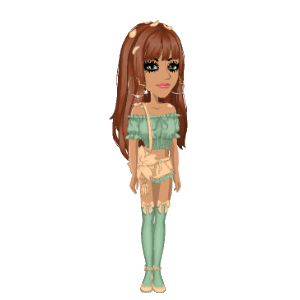 Ashley Twin started gaining fame from making MSP Gameplay Videos on Youtube. She also became even more recognized when she befriended 1st page Moviestar (from 2013-2015) Izaiahh. She became a top member of Izaiahh's family "9 Lives" and still is to this day.

Ashley was also known for being a very active member in the MSP Twitter community, creating a lot of friendships and gaining the love of many moviestars. However, her main source of fame was always her youtube channel. She gained over 800 subscribers in 2 years of making videos and has videos still on her channel crossing over 20,000 views! 800 subscribers were a lot in the years 2013-2015 for a moviestar. Her most famous video can be found here

During 2013-2015 she created over 300 youtube videos which most were deleted during May, 2020 for unknown reasons.After her leveling up video, her most viewed videos were the other few she left on her channel followed by over 100 Mailtimes and Wishlist Giveaways, both inspired by IzzyWizzyWooxox (UK Moviestar/Youtuber).

Ashley Twin is one of the few moviestars who doesn't have a unique style but switches it up as often as every theme. She keeps it girly however and loves trying new or different colours for her outfit.

The only trend she keeps is her dark green eyes, pointy nose and cherry gloss lips.

She tries to make more NON-VIP looks as she wishes to create for all moviestars.

Her artbooks are often used to spread positivity in the MSP community or give thanks to her friends and fans. Over 100 of her artbooks were also deleted in May, 2020. Leaving many random artbooks she created in 2013 itself.

Ashley created a few series over the years with her most famous being "Sisters" an unfinished series based on siblings with a secret life and "My Life As A Popstar," a Hannah Montana inspired movie.

However, ongoing series was proven to not be Ashley's thing as she started creating short movies just like her bestfriend Izaiahh. She currently has over 75 short movies and continues to make, with her top viewed being "FAME SM 2" a Short Movie created while she was on Booster and gained over 700 views in less than an hour.

Retrieved from "https://moviestarplanet.fandom.com/wiki/Ashley_Twin?oldid=183430"
Community content is available under CC-BY-SA unless otherwise noted.